A Blog from the Missouri Department of Elementary and Secondary Education

Problem solving, teamwork and presentation skills are the sorts of benefits students can receive through the hands-on, real-world instruction of project-based learning. Lessons learned from project-based agriculture classes recently paid off big for four Missouri FFA chapters. They each won top prizes at a national competition in Indianapolis. 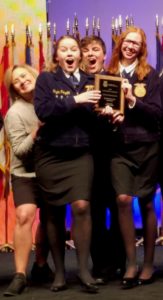 The Marshall chapter was recognized as the nation’s Overall Top Chapter in the Model of Excellence division of the National Chapter Award Program. The chapter co-advisor, Tyler Burgin, said that even though a small team went to the national convention, everyone in the chapter contributed to the win.

“We have 165 members in the Marshall FFA,” he said. “They all played a part. They never let up, never took it easy. This is a great group of kids.”

Callie Dobbins works with Tyler as co-advisor. She said there is a lot of project-based learning in agriculture classes.

“Citizens of the community and FFA members frequently approach our chapter with problems that they are facing,” she said. “We use this as an opportunity to make a quality activity that solves the problem.”

Callie said school district administrators encourage teachers in all subjects to use problem-based learning when it fits the curriculum to meet the needs of students in their classes.

That’s another aspect of project-based learning – it pulls in skills from several content areas. Kevin Sawyer is the advisor for Fair Play’s FFA chapter. His team won first place in the Milk Quality Career Development contest after winning the state competition in April.

“The students use writing and presentation skills,” he said. “They use math skills to determine how much 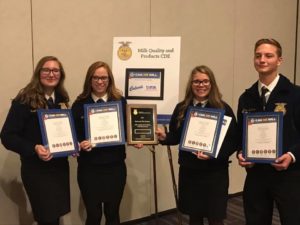 a farmer would be paid. They use analytical, problem-solving and critical-thinking skills. They create a flow chart in their minds.”

“We also visited a research lab,” he said. “They learned techniques for testing and grading milk and how to check for mastitis infection in cows. That really helped them in competition.”

There were four students on Fair Play’s Milk Quality team: Sumona Khadyrke, Lexie Simpson, Kenzie Clark and Travis Buckner. They each placed individually in competition as well. Kevin said the team had the will to win.

“It wasn’t me. It was their effort and dedication,” he said. “I knew they had the potential to win. They are the hardest working students I’ve had.”

The students expressed an equal level of respect for Kevin. They said he kept them on track and motivated them. He would bring in inspirational quotes, such as  “You have what it takes, but it will take all you’ve got.” He devoted hours of time to prepare them for competition and helped build their confidence. They said he had their backs.

“Being on the national team was a lot of work for us,” Lexie said. “Mr. Sawyer told us he was proud of us even if we didn’t win.” 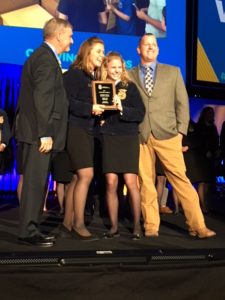 The Paris FFA chapter won the national award for Growing Leaders. Through their project, the members learned while helping others learn. The project was called “Beef Up Reading.” The chapter members visited Paris Elementary School for Title 1 reading night, when parents come to the school to learn how to help their children read.

“About 45 people had been attending the reading night,” said FFA advisor Jaelyn Peckman. “When word got out that the FFA members were serving a free brisket dinner, about 200 people came.”

No surprise there, and the evening was part of a successful effort to bring up reading scores at the elementary school. Since then, the FFA members have sponsored “Nacho Average Reading Night.”

The Paris team in the Growing Leaders competition spent six to eight weeks building their presentation, presenting it to school staff for feedback and memorizing the script.

“It was a win in our minds when we saw the smiles on their faces as they came out of the presentation” Jaelyn said. “The girls said, ‘We nailed it.’”

The effort won’t stop with reading. Jaelyn said that in teachers’ meetings at the elementary school, it was noted that math scores are lower than desired. The FFA is stepping up to help improve student outcomes in math. “Bacon Math Fun” allows the elementary students to win handmade pink pigs when they reach quarterly goals. Jaelyn said they hope to line the entire school with pigs, and so far they’re lined the first and second grade pod and the library. FFA members are preparing to throw a snow-cone party for the elementary students to celebrate their progress.

Project-based learning is important for teaching students the skills they need to develop careers, but hands-on experience also helps the students build their self-confidence. Brant Burns is FFA advisor in Hamilton. His team won the top national prize in the Nursery and Landscaping division.

“The team members showed up ready to work every time, and there was no messing around,” Brant said. 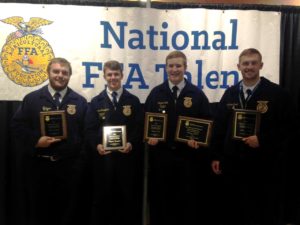 Brant said that can-do attitude and work ethic have been cultivated for years in the community through championship football and other sports programs. The school supports the students, and the community is very interested in how they do.

Brant said his team members each had individual activity scores that were totaled for a team score. There was also a team activity in which the students had to plan a community garden, determine how to get people involved, and decide who would get the produce. They had 25 minutes to plan, and their presentation was 15 minutes.

The students were able to draw on their knowledge of plant identification, installation and operation of irrigation systems, propagation, and types of tools and equipment. They had also had classroom instruction in customer relations and agriculture sales. The skills and knowledge they gained from project-based learning helped them to win the national competition.

“It feels kind of surreal,” Brant said. “I’d like to feel surreal again next year.”