A Blog from the Missouri Department of Elementary and Secondary Education

Albert J. Sanders, Jr. still remembers the excitement he felt on Christmas day. He recalls that it was about 1985. Sanders was only in second or third grade at that time, when he unwrapped the greatest gift ever – a Voltron, Defender of the Universe toy.

“It was a really cool toy!” he said. “There were five lions. Each of them was fun to play with on their own, but they all came together to make one, big, awesome robot figure that could fight battles and face enemies. I wanted to be Voltron.”

Sanders has been a pre-K teacher at Adams Elementary School in St. Louis for the last 14 years. He’s not defending the universe, but he does believe that teaching is the greatest and most noble profession on Earth.

“I say greatest profession because, in partnership with parents, teachers are the best positioned to equip young people with the knowledge, skills and behaviors to unlock all other opportunities in their lives, both professionally and socially,” he said. 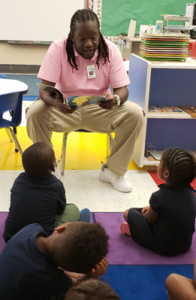 In 2018, Sanders was named a Missouri Regional Teacher of the Year. This award is part of the Missouri Teacher of the Year program, sponsored by the Department of Elementary and Secondary Education (DESE), which recognizes the efforts of effective teachers in providing a quality education for their students. Preparing, developing and supporting effective educators is one of DESE’s primary goals.

“He truly loves what he does and it is reflected in his classroom and students,” said Lindsay Schuessler, Sanders’ academic instructional coach. “He is the type of teacher you would want for your child.”

Sanders was always a good student and enjoyed being in school. Second grade was probably his favorite year because of his teacher. Sanders remembers that she was always understanding and encouraging.

“I had a problem with talking out,” he said. “As my hand was going up, I was already speaking out. It was just my enthusiasm. She never made me feel an ounce like I was in any trouble for speaking out.”

The teacher’s understanding nature was one of the reasons he decided to become a teacher himself. Sanders said that he tries to be like her with his students, who are enthusiastic and eager to learn. Sometimes, they’re a little too excited, much like he was as a second grader.

“We do need to bring it back in every once in a while, but I want them to be excited about learning. I want them to want to come to school,” said Sanders. “If they miss a day because they’re sick or something and they’re a little upset that they’ve had to miss, then I’ve reached my goal.”

As it turns out, Sanders is a lot like Voltron.

“Teachers aren’t just teachers. Our jobs can range from comedians to psychologists, coaches to judges,” said Sanders. “All of us must be gap-fillers, meeting the needs of every young person. When I watch my students leave my room, I feel satisfied knowing that I teach with my values front and center, and it is because of that that my students are better prepared to lead life.”

Teachers are role models who inspire and encourage. They’re understanding, and the best of them play several parts that all come together — like those five lions — to form a child’s whole future.